Apple New iPad (iPad 4)  Mini With 7.9 Inches: Apple has met forecasts and presented the iPad Mini, a new ‘Tablet’ of 7.9 inches Screen. The device comes to complete range of iPad available to the model. The new iPad Mini will compete directly with models from Amazon and Google, both in performance and price. 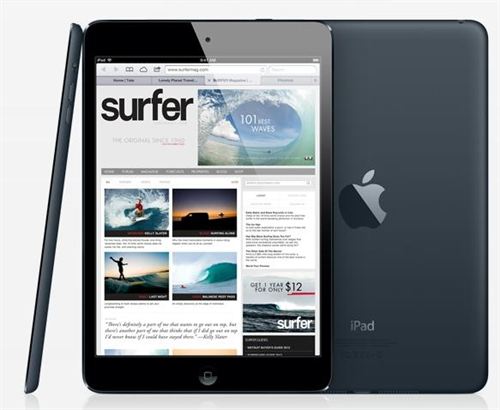 Rumors and leaks pointed to expand the family Apple iPad, which has sold 100 million devices, and finally it has. The company had already hinted at his intentions in a press invitation announcing something “small” as the protagonist of his lecture. In order to reach more customers and offer more variety, Apple unveiled the iPad Mini.

It’s a 7.9 inch device with a screen resolution of 1024 by 768 pixels, designed for consumers who want a cheap and simple terminal that the current iPad and education.

Although at the time Steve Jobs said that 7 inches were few for a ‘tablet’, the experience of Amazon and Google recently confirmed that it is not. Apple has rectified and has joined the group of the ‘tablet’ tail ‘, but of course, respecting the hallmarks of iPad devices.

The new terminal has a design very different from the traditional iPad, where it has ignored the frame of the screen to maximize space. The iPad mini has a thickness of 7.2 mm and 308 grams prey. Continuing its design, Apple has confirmed that will be available in black and white, with a finish reminiscent of the iPhone 5.

The device has a dual-core A5 chip that Apple offers graphics as more fluid and allows use of Muti-Touch the screen in a fast and dynamic with a battery that lasts all day. The terminal also has front camera to enable FaceTime HD and a Rear 5 Megapixel Camera.

The mini iPad with Wi-Fi will be available on Friday, November 2, for a suggested retail price of 329 Dollars for the 16GB model, 429 Dollars including VAT for the 32GB and 529 Dollars for the 64 GB. The device will be available in stores in Germany, Australia, Austria, Belgium, Bulgaria, Canada, Korea, Denmark, Slovakia, Slovenia, Spain, United States, Finlandi and France among others.