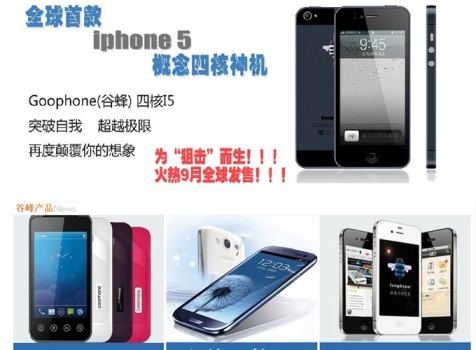 Clone of iPhone 5:  GooPhone is the Chinese company that has made headlines in recent days to release in an imitation of fake iPhone 5 design based on the assumption of the new ‘smartphone’ Apple, not far, far from there. It offers a range of imitation models through their website. (http://shop.goophone.hk/)

The Chinese company page announces no qualms with photos and all kinds of mobile phone accessories and various models of imitation incredibly similar to some of the most popular terminals Samsung, Apple or Sony. Furthermore, we wonder if planted directly the original photo companies.

On the web page of your online store, a big screen announces the new i5 with a picture of the Chinese version of the new iPhone, which uses its own version of Android, Honeycomb bee as logo, as substitute iOS operating system Apple. The announcement, which includes direct reference to iPhone 5, is the gateway to a whole catalog full of imitations.

The model Galaxy Nexus or Samsung Galaxy S III to have your copy of GooPhone Chinese version, with prices ranging between 399 and 999 yuan (from 50 to 125 euros), a price much lower than the original terminals .

Of course, things did not start there, and you will eventually be created clones of the iPhone 4 and the iPhone 4S. The previous iPhone models also have their version GooPhone, which are announced by a “special limited price” of 1150 Chinese yuan (about 143 euros).

The website also shows a wide range of accessories for smartphones, since USB connectors in various colors to helmets and custom enclosures. What is less clear is the quality, which in many cases is not specified by the price and product photo.

Sure the cheap copies of these devices offer an experience far removed from those achieved by the world’s leading manufacturers such as Apple and Samsung. However, look out so much, it makes you want to try one, eh? As proof, here’s the video of the iPhone 5 clone.