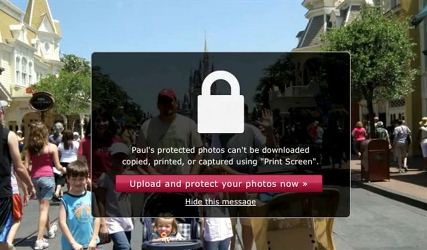 The main function of McAfee product Facebook will assure the user that when someone can not view photos or download them or share them with others, plus you can not make or a screenshot of the image.

In fact, the person attempting to do any of these actions will display a padlock in the picture that tells you that the photos of that user are protected and can not be downloaded or captured. Then the user is advised to download curious Social Protection to have the same privacy that Facebook mate.

Thanks to the collaboration between McAfee and Intel, Facebook will display the user’s pictures blurry and not allow them to be downloaded, shared or captured, at least until their recipients have also installed this functionality.

Protecting your identity on Facebook is another area that will covered the ‘plug-in’ of McAfee. Since, through facial recognition software will warn the user that someone has uploaded a photo that you may see him or her but the system does not directly label.

The ‘plug-in’ of privacy for Facebook is, first, available for PC users with Internet Explorer, Firefox or Google Chrome in late August. Soon after, Social Protection will be coming to Mac users, for before the end of 2012, will be the turn of the devices with IOS or Android.

The protected photos require others who also download the ‘plug-in for viewing, which means that the person who will buy will need to restart your browser once the installation process.