Grand Theft Auto V: Grand Theft Auto Five is one of the most anticipated games in development, but the available information is scarce. Now Rockstar has released new image at least remember that the title is in the oven. 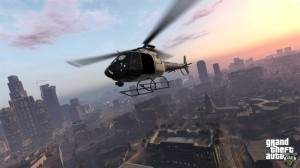 Rockstar Games is leading the development of the next installment of Grand Theft Auto with great secrecy. The company published the first official trailer in November 2011 and after that decided to keep a dead silence.

Fans of the series and the press expected to see the sandbox at E3 in Los Angeles in June, but Grand Theft Auto V finally did show up.

Now, two new images invite the GTA fans to travel to Los Santos, the city inspired by Los Angeles where the game will pass. Few details offered snapshots, whatever it looks like the graphics engine will provide a new depth of field, water reflections and shadows improved over GTA IV.

The title has no release date and Rockstar Games has not offered details about the plot or the development of missions. Now it is again expected.