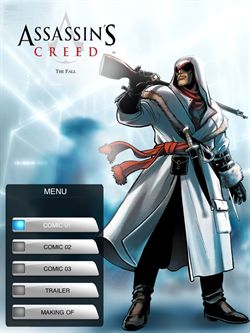 The Assassin’s Creed series has captivated millions of consoles and PC users thanks to its spectacular, gameplay and story. Indeed its rich universe has led to create works derived from the games in the series. For example, recently announced Assassin’s Creed film and there are novels that recount events of the game.

Now, Ubisoft wanted to offer iPhone users the ability to enjoy a new adventure in Assassin’s Creed. This time the protagonist is Nikolai Orelov, master murderer who stars in the comic series The Fall Assassin’s Creed.

Orelov is a murderer who develops its history during the twentieth century, in full Russian Revolution. The basic characteristics of the series, action, violence and a complex plot, are reproduced in the comic books now come to the iPad.

Ubisoft has explained that his team has worked to enable users to enjoy Assassin’s Creed The Fall exploiting the characteristics of the iPad. In this way, users can enjoy high-definition three comics that make up this series using the functions of horizontal or vertical display, navigation pages, or zoom color choice offered by the iPad from Apple.

Users interested in knowing the story of Assassin’s Creed The Fall should download the application Comics Assassin’s Creed, which will cost 0.79 euros and can see the first issue of the series The Fall. The other two supplies can be purchased for 2.39 euros each. Visit Apple Store