Google Drive Exceeds 5 Million Downloads in Android: The storage service in the Google cloud, Drive, has broken records before they met the first 24 hours of its release. Google Drive has registered more than five million downloads through Google Play Store, thanks to an updated version of Google Docs. The cloud of Google, which offers 5 GB free and a premium version with more space, has started strong in the field of ‘cloud’.

The competition in the ‘cloud’ increased with the arrival of Google Drive on Tuesday. The service in the cloud of the Mountain View joins the Microsoft-SkyDrive services-, DropBox, Box or Evernote, available services in a while. 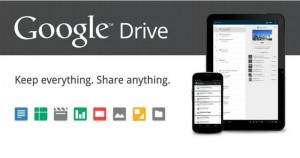 Faced with the imminent arrival of Google Drive, the other companies were quick to update their cloud services by increasing competition. But Google Drive came with 5 GB of mass storage and a wide range of payment for service; offer that seems to have captivated users.

During the afternoon of Tuesday, at approximately 19.00 hours (CET Spanish), Google made available to Google users in their service Play Store Drive for download. Less than 24 hours after its release, the cloud service from Google has been downloaded by over five million times.

Google Drive includes important features like integration with Google Docs or a choice between two versions: the free and the Premium version. As for the free version, users have 5 GB of storage. However, the premium version offers more benefits to users in exchange for a monthly fee.

In addition, Google has released a version with specific functionality for enterprises. These features include centralized management tools, incorporating encrypted files, ensure access at all times to documents, as well as technical support.

Update: Google Docs is part of Googe Drive. This is an updated version of the service that lets you create and edit documents, presentations and spreadsheets in the cloud. Now with the arrival of Drive, Google Docs has become part, from this Tuesday, the cloud service from Google.