Singapore: Tampines Accident, Two Young Brothers Bodies Identified by Family, who who were killed after being hit by a cement mixer truck while cycling at Tampines. MP Baey Yam Keng says authorities will review the junction of Tampines Avenue 9 and Tampines Street 45, following a fatal accident there.

The young brothers named as Nigel Older Brother and Donovan Younger Brother cycled around the Tampines estate frequently. The tragic accident came as a rude shock to their distraught parents who said their sons were usually very careful on the roads.

Mr Francis Yap, the father of victims (2 boys), said: “It’s very sad. As a father, I have lost two kids. I hope that those people driving on the roads think about other people’s families also. For those small roads, it’s better to travel within the speed limits and don’t go so fast, especially if you drive a big vehicle. It’s very dangerous. So you must take extra caution to safeguard other people’s lives.”

Tampines GRC MP Baey Yam Keng explained: “Given that this incident involved a cement truck and because of the various projects that are happening in the area, (such as) public housing projects (and) MRT lines (construction), there will be more heavy vehicles in the precinct.

“So, I’ve asked the authorities to review the routes taken by these vehicles to see if there is any way we could re-route them so that they avoid areas which are near schools or where there are many pedestrians.”

He told The Straits Times at the accident site Tuesday morning: “Think the elder brother was fetching the younger brother home after CCA. Apparently that was his first day at CCA at wushu.”

The mother involved in the gruesome accident on Monday identified her two boys dead bodies on Tuesday morning. She arrived at the mortuary just before 8am surrounded by a group of relatives, friends, and a man who is believed to be her husband.

After identifying the bodies, she emerged from the viewing gallery in tears, and had to be helped up. Members of her group waved reporters off when approached. Most of them left shortly after.

The younger boy was riding pillion on the bicycle. One boy died instantly and the other died soon after. 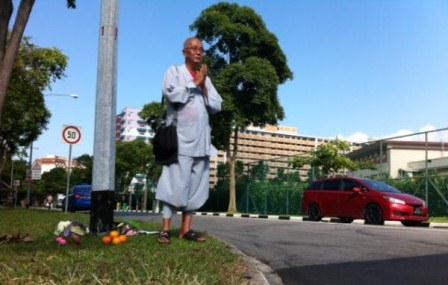 Madam Hong Thi Vy, 42, a Vietnamese who lives at the block adjacent to the accident site, witnessed the accident. She was seen putting joss sticks and fruit by the grass patch at the site on Tuesday morning.

She said she was taking her baby for a walk when the accident happened. “Boom,” she said recounting the impact. “Baby scared…I see, I very sad.”

Mr Baey said the wake will be held at Block 463 Tampines Street 44 and the funeral is on Thursday.